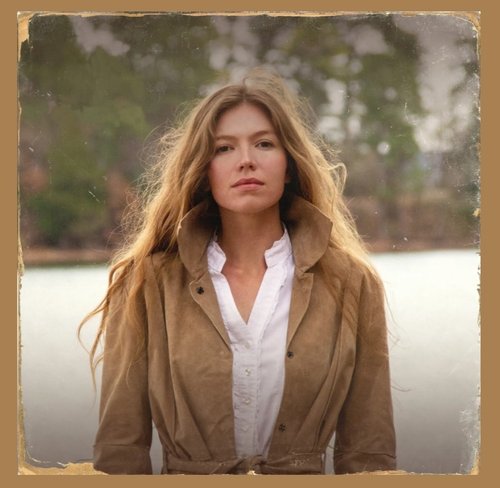 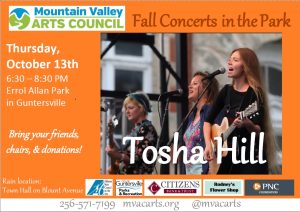 Mountain Valley Arts Council will host the Tosha Hill on Thursday, October 13th from 6:30 – 8:30 PM at Errol Allan Park in downtown Guntersville. Bring your fans, folding chairs, and friends.  Concessions and door prizes will available, and several downtown restaurants will stay open so you can pick up box dinners as the concert starts.

Alabama singer/songwriter Tosha Hill unleashes Shoals soul while staying true to her country roots in her debut EP, Forty Miles, a collection of 5 songs co-written with her father, Billy. A regular at Nashville’s Bluebird Cafe, Tosha has also had co-writes with Rock and Roll Hall of Famers: John Oates (Hall & Oates), Spooner Oldham, and Brenda Lee (Rockin’ Around The Christmas Tree). She has shared the stage with Jason Isbell & The 400 Unit, John Paul White (Civil Wars), Randy Owen (Alabama), Shenandoah, and Lonestar.

Matt Wake of AL.com says, “Tosha Hill has mononym-level talent. As a roots-music singer, she’s got such pure tone and feel they – if combined with the right songs, business and luck – could maybe make a woman not just known but known by just one name. As in Dolly. Emmylou. Ronstadt. Hill is that special on the mic, as heard on her new EP, “Forty Miles.” The five-song set is one of the best Americana recordings you’ll hear this year by an artist under the age of 30.”

Tosha’s musical journey started from performing at churches in her hometown of Muscle Shoals to honing and crafting her talents in the legendary recording studios among the originators of the Muscle Shoals Sound. Those echoes of inspiration resonate to this day leaving its lasting influence on her as a young, new artist and her music. Having walked in the footsteps of some of music’s greatest performers, she exhibits an exceptional presence onstage that leaves the audiences wanting more. Tosha used a work ethic and support from her dad to cultivate a sound that is pleasing just as much as it is original.

If rain occurs, the concert will be moved indoors to Guntersville Town Hall on Blount Avenue. Any change in venue will be posted on MVAC’s Facebook page and MVAC’s website, mvacarts.org