Held in Errol Allan Park in downtown Guntersville Thursdays 6:30 – 8:30 pm mid-April through May,

these concerts are free to the public. Bring a chair and enjoy the show! 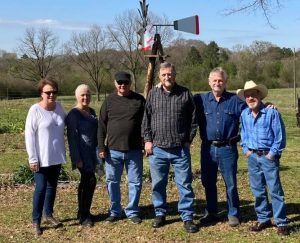 Mountain Valley Arts Council will close its free Spring Concert Series with Southern Heart band. The concert will be held Thursday at 6:30 – 8:30 PM at Errol Allan Park in Guntersville at the corner of Gunter Avenue and Taylor Street. Concessions will be available at the concert as well as nearby restaurants such as Downtown 412, Café 336, Hadwin House, and Old Town Stock House. You can order your dinner in advance and pick it up before the concert starts and have a picnic.

Southern Heart’s music consists of a variety of Country, Southern Rock and Blues, heavily influenced by Southern Gospel and Bluegrass.

Each member has a deep musical history spanning as far back as the late 70s.  Some of the earlier musical experiences included television performance on the Country Boy Eddie Show, singing on stage with Bill Monroe in the 80s, playing Bluegrass festivals, opening for David Allan Coe in the 90s, and traveling and singing Southern Gospel.

Mark your calendars and bring your folding chairs to enjoy great musicians.

MVAC’s next concert will feature Soul Survivor at Civitan Park before the Guntersville 4th of July fireworks display.  For that concert, you may need bug spray and sun block as well as your folding chairs.